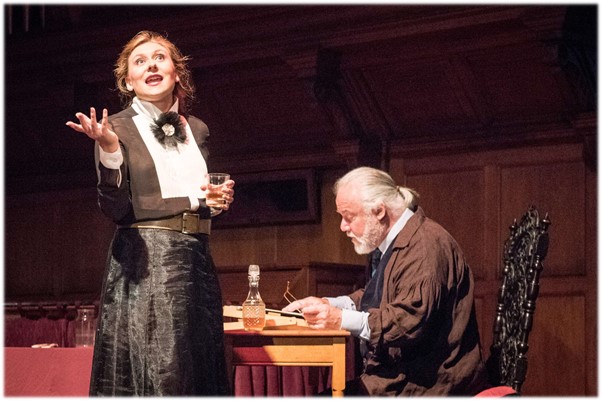 John Tomlinson, who has been striding the world’s opera stages for several decades, has long been contemplating the role of Shakespeare’s Lear. This new work by John Casken incorporates Shakespeare’s text in the form of speech, sprechstimme and singing. It is a role destined to crown Sir John’s glorious career.
Sir John Rowland Tomlinson has sung for the world’s leading opera houses, including the Metropolitan Opera, New York, La Scala, Milan, and Berlin State Opera, the opera companies of Pairs, Munich, Dresden and Geneva, all the major British companies and at the Glyndebourne, Aix-en-Provence, Salzburg and Munich festivals. Tomlinson was made a Commander of the Order of the British Empire (CBE) in 1997 for his services to music and was knighted in the 2005 Queen’s Birthday Honours List.

Rozanna Madylus is a graduate of The Royal Academy Opera School, where she was recipient of The Karaviotis Scholarship and The Sir Charles Mackerras Award. Born in Leicestershire, of Ukrainian descent, Rozanna was on the Young Artist Platform at The Oxford Lieder Festival and, since then, she has been invited to perform in various concert halls around the UK and abroad. She has sung roles all over the UK, and her first CD, performing alongside Sir John Tomlinson in Kokoschka’s Doll is available on Champs Hill records. Rozannna is also the soloist in Brünnhilde’s Dream, a sequence of music imagining the state of mind of Wotan’s favourite Valkyrie daughter as she lies on the rock, surrounded by fire, after the end of Die Walküre. The sequence contains works by Wagner, Schubert and Schumann.

This collaboration is with the acclaimed ensemble Counterpoise, a highly acclaimed ensemble consisting of some of the most sought-after instrumentalists in the UK. Its programmes cross musical genres and explore the relationship between music, poetry and visual elements, seeking also to develop aspects of narrative and other extra-musical influences. The unconventional line-up of violin, trumpet, saxophone and piano enables composers to create new soundworlds and to experiment with challenging fusions of music, text and visuals.